Inflatable wing foil boards seems a logical step. The board is not in contact with the water when flying so shape / rigidity is of less importance.

Why are there not more inflatable windfoil boards (with mast track?)
Top

Because when small movements have big impact an inflatable feels more vague as a hardboard.
That asks for a solid mastplate and high PSI to keep the construction stiff. More PSI needs more reinforcements=more weight so the benefits of a hardboard are getting smaller.
And as a bigger WING-hardboard is 5.8/175cm, the space they take can,t be really a good argument.
Top

Any details on that JP multisport inflatable? It's not on their website.....
Top

I don't have much info on the JP apart from their being a 130 and 150 ltr option. The foil box is supposed to be us tracks + a deep tuttle.

The JP Freefoil Air is advertised, mentioning but not showing the tracks.

The specs on there seem somewhat mixed up with the smaller board being wider and heavier.

I will do a review as soon as I have it.
Top

Wingfoil waterstarts. He is using a GoFoil NL foil, which has sharp front wingtips, so has to be careful not to shred the windwing tip.

I finally got the XXLW wings for the Zeeko Spitfire foil. It is known to work well for wingfoiling, but I read that it doesn't suit windfoiling. I haven't seen any explanation of what the issue is, so I tried it yesterday for a very short session in a 140m long pond with a 4.5m sail.

The wind dropped while I was rigging, and was gusty and stop/start so it was only occasionally enough to get it flying (I don't pump). I did get one 50m smooth, level glide where everything felt balanced, so I will keep trying it for windfoiling to find out how it behaves. I was having to force the other short flights and trying to find where my feet should be (strapless). I was advised to keep the sail and foil as close together as possible. The distance between the sail base and the front of the foil mast was 70cm, and I have found with other foils that when they are close together the directional stability reduces. The mast is 40cm, and I have a 70cm for it too. Both wings lift upwards and the total area is 1300 sq cm. The span of the large wing is 56cm. 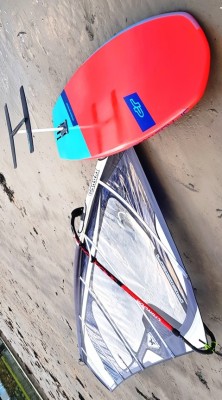 This is the Zeeko designer with the XXLW or a very similar foil to the XXLW.

Interesting foil and a complete different approach as the other brands.
Top

Jeroensurf wrote: ↑Sun Feb 07, 2021 3:36 pm Interesting foil and a complete different approach as the other brands.

The designer explains some of the stronger attributes of the Spitfire foils. One disadvantage is that it doesn't pump as well as the current normal foils.

It may have some safety features - such as being narrow span and having blunt wing tips. With wingfoiling being more risky than windfoiling, that was one of the reasons I got the canard foil.